ndreas Vesalius, the father of modern anatomy, was born in Brussels on December 31, 1514, into a family of physicians and pharmacists. His father was employed as an apothecary by Emperor Charles V (1500–1558), who ruled the Holy Roman Empire and the Spanish Empire. His mother came from a wealthy family. Vesalius was lucky enough to be born at an age of great intellectual change and, like Erasmus of Rotterdam or Leonardo da Vinci, was a man of the Renaissance.

In 1529, Vesalius began his studies at the Castle School of the University of Louvain in Belgium, where he, like most wealthy men, was taught rhetoric, philosophy and logic, as well as Latin, Classical Greek, and Hebrew. Soon, however, Vesalius turned his focus to medicine and, in 1533, went to Paris, to study at one of the leading North European medical schools of the time.

By then, Vesalius was already known for his skills in dissection. He studied under Jacobus Sylvius (1478–1555) and Johann Guinter von Andernach, who had both translated works of the ancient physician Galen and had combined Galen’s knowledge with their own findings; nevertheless, they remained primarily Galenists. 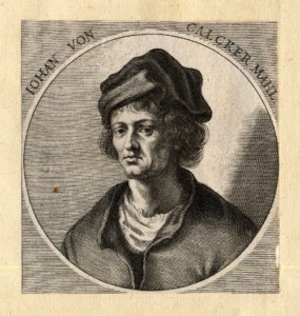 When war between France and the Emperor broke out again in 1533, Vesalius left Paris and returned to Louvain. Despite not being satisfied with his professors, he was able to gain more experience in anatomy and dissection. In 1537, Vesalius moved to Padua in northern Italy, which at that time was known as a thriving environment for scholars from all over Europe. He graduated in December of the same year, and a day later was appointed to a lectureship in surgery and anatomy at the University of Padua. The 18 months that followed confirmed his anatomical reputation. He published the Tabulae anatomicae sex, six anatomical plates drawn by painter and woodcutter Jan van Calcar as an aid for students.

At the age of 24, Vesalius was bold enough to free himself of the traditional methods of Galen and his followers, and held the belief that the study of human anatomy should be based on visible proof gained from dissecting human bodies. Until then, Galen had dissected mostly animal cadavers, and Sylvius and other authorities of Vesalius’ time tended to teach by reading from the writings of Galen while menials, most often students or surgeons, carried out the dissection. Vesalius’ argument was for learning from hands on experience.

Over the next few years, Vesalius’ salary increased alongside his reputation, enabling him to work concurrently on what would prove to be his masterpiece, De humani corporis fabrica – On the Fabric of the Human Body. He probably started writing in 1540 and was almost finished by the summer of 1542. Vesalius benefited from the intellectual climate in Padua and Venice and made use of the time to concentrate on this publication.

In autumn 1542, the illustrated woodcuts of the book were transported to Basel, Switzerland, where it was printed by Johannes Oporinus (1507–1568) who was gaining fame for the quality of his printing. Vesalius even obtained privileges that protected the Fabrica from unauthorized copying. It is not clear why he published his work in Basel: even though the city was an important center of printing during the Renaissance, Vesalius would have found excellent printers in Venice as well, without having to transport the woodcuts. But one factor might have been that Basel’s location on the Rhine facilitated the distribution of De humani corporis fabrica into Northern Europe. In January 1543, Vesalius arrived in Basel to oversee the printing of his magnum opus, but did not neglect his core skill as an anatomist: during his stay, he dissected the body of an executed criminal; the skeleton can still be seen at the Anatomical Museum of the University of Basel. He also prepared Andreae Vesalii suorum de humani corporis fabrica librorum epitome, a condensed summary of his works for students consisting of six chapters and nine illustrations.

The illustrations in the original Fabrica were lavish, but not in color. However, a most beautiful, richly hand colored and expensive copy of the Fabrica was prepared for Charles V. The Emperor was pleased with the book, which featured a florid dedication to him, and appointed Vesalius to his medical staff. Vesalius believed that while working at the court he would not have enough opportunity to continue his working and writing on anatomy. Although he – and Vesalius scholars to come – came to regret it, he disposed of most of his library and destroyed his notes on Galen. 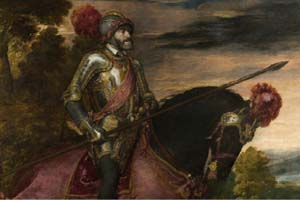 In late 1543, before Vesalius started to work for Charles V, he made another trip to Italy. About 500 people attended a lecture he gave in Padua, a sure sign of his success. He continued on to Pisa before joining the Emperor who was at war with France at the time. While there, Vesalius helped in treating the wounded and preparing the dead for burial. In 1544, he married the daughter of a rich counselor of Brussels, and a year later a daughter was born.

During that time, many reactions to Vesalius’ Fabrica began to emerge, both positive and negative. His former teacher Sylvius was an especially harsh critic of Vesalius’ works after having had his methods cast aside by his now prominent former pupil. In response, Vesalius published the Epistle on the China Root, which is mainly a defense of the Fabrica against Sylvius’ accusations of rejecting Galen.

While performing autopsies, Vesalius continued to practice his dissections. His skills were highly regarded and he opened a private practice, the earnings from which enabled him to build a larger house in Brussels while he could prepare the important second edition of the Fabrica. This second edition, published in 1555 but largely completed already in 1552, was an improvement on the first edition and a direct result of his increased anatomical knowledge and experience. He rejected the old Galenic views even more vigorously, expressing doubts about traditional descriptions and demanding further investigation into new findings.

When Charles V abdicated his throne in 1556, Vesalius was pensioned off, but he was immediately reemployed by Philip II who was successor to Charles V. In 1559, Vesalius was called upon to help treat the French King, Henry II, who had been injured during a tournament; he could not save him but was appointed to conduct the autopsy. Soon after, Vesalius moved to Spain, where he wrote his last essay, a friendly response to the anatomical observations of Gabriele Fallopio (1523–1562). In his last years, he helped cure the heir to the throne, Don Carlos, who had fractured his skull during a fall.

Then, in 1564, Vesalius left Spain for Jerusalem for reasons that never became quite clear. Unproven speculation held that he conducted an autopsy on a person who – as he found out during the dissection – was unexpectedly still alive. Further, it was rumored that he was accused of heresy by the Spanish Inquisition and had to flee; or perhaps the pilgrimage to Jerusalem was just a polite way of him leaving the Spanish court. 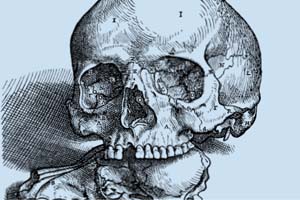 Illustration of a skull from the Fabrica

He left Spain with his wife and daughter at the beginning of 1564. While they returned to Brussels, Vesalius continued on to Venice and then further to the Holy Land. Soon after he had set sail, he was reportedly offered a chair in anatomy as successor to Fallopio at Padua. However, Vesalius never returned home from his travels to the Middle East. On the return trip, the ship was hit by a storm and driven ashore on the island of Zante (Zakynthos), Greece, where Vesalius fell ill and died in 1564. No one knows where the remains of this great anatomist and author are buried.

Adapted from Vivian Nutton’s Introduction to The Fabric of the Human Body.

Dr. Sachiko Kusukawa about her favorite anecdote about Vesalius

What is it that makes Vesalius so important Dr. Vivian Nutton?