An Anatomist at the Cutting Edge of History

ndreas Vesalius was both honored and reviled in his time, as he challenged the status quo of science and many prevailing dogmas. His influence on the fields of medicine and anatomy has been profound. In these pages, you will learn more about the factors that shaped Vesalius’ train of thought and the anatomical revolution of which he was a driving force. 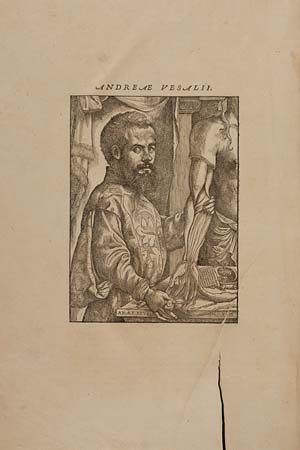 Andreas Vesalius 1514-1564: the only authorized portrait

The Flemish physician Vesalius (1514–1564) was a highly skilled dissector who insisted on analyzing human corpses rather than animal cadavers. Vesalius vehemently refuted his teachers’ old methods, garnering enemies and searing criticism, but he did not give up on his quest. He is best known for creating perhaps the world’s most influential book of anatomy, the De humani corporis fabrica, at the young age of 28. Read on to learn more about this revolutionary genius.

The legacy of Vesalius’ comprehensive anatomical works would linger even into the next millennium. His writings combined intricate detail with exquisite illustrations and he also took masterful advantage of the era’s new technologies in publishing. These pages aim to help you better understand Vesalius’ background and how his work influenced the changing face of science.

From his birth in Brussels in 1514 to his unexplained death on a Greek island 50 years later, this biography summarizes Vesalius’ remarkable life and work. It has been adapted from the work of Vivian Nutton, a luminary in medical history and expert on Galenic and Vesalian studies. More