ascale Pollier has developed a great fascination for the life and work of Andreas Vesalius and is involved in different projects celebrating his 500-year anniversary in 2014.

You are involved in a project which aims to find Vesalius' skeleton on Zakynthos. Please tell us about the project and how you became involved. What is the goal of this undertaking?
In 2009, I completed a course on facial reconstruction in Maastricht. It was then that the idea developed to make a facial reconstruction of Andreas Vesalius. Not knowing where he was buried, but assuming it was in Brussels, my colleague Ann van de Velde and I went on a quest to find the grave of the great anatomist.

This quest took us to the Ionian island of Zakynthos, where the death of Vesalius has been an unsolved mystery for the last four and a half centuries. The cause and manner of his death and the exact location of his burial site have not been ascertained, and existing testimonies are considered doubtful. Many questions remain unanswered. Was he shipwrecked in Laganas? Did he die from starvation, scurvy or the plague, to name but three possibilities? Was he buried in Pantokratoras at the site of the lost Franciscan monastery or perhaps in the church of Santa Maria delle Grazie? We decided to find out for ourselves. We sailed to Zakynthos and embarked upon our quest.

In 1952, pharmacist Nikolaos Barbianis perused the manuscripts of the Roman Catholic bishop of Zakynthos, searching for evidence of the place where Vesalius was buried. Barbianis, or "the savior of the ruins," as he is known, placed a stone at the place where the Franciscan monastery once existed, at the site Kalogerata, better known as 'Franciscan Church' Laganas Pantokratoras. The inscription read as follows: "Here at the place where the Franciscan monastery of Theodores "Kalogerata", 1471, was located, the great anatomist Andreas Bezal died, cast away at the remote coast in 1564."

Parallel to this theory, we are investigating another theory that Vesalius could be buried at Santa Maria delle Grazie. The Flemish author Giovanni Zuallardo mentioned in 1586 that the Franciscan brothers had a monastery called 'Annunciata,' where they buried their dead. He claimed this as the burial place of Vesalius. The epitafio was lost in 1571.

What has been learned so far?
Evidence provided by various researchers, including Belgian researchers Omer Steeno, Maurits Biesbrouck and Theodoor Goddeeris and Greek historian Pavlos Plessas, unquestionably point to the Santa Maria delle Grazie church in the city center of Zakynthos. The church was completely destroyed by the earthquakes of 1893 and 1953 and any new effort to find the grave must therefore inevitably begin with the identification of the original location of the church.

What steps and technologies are being used?
First, a historical Geographical Information Systems (GIS) will be used to digitally register, rectify and analyze contemporary and historical maps, to try and identify the original position of the church that vanished under the rebuilt, contemporary city. In a second phase, a geophysical approach may follow, employing non-destructive ground penetrating radar (GPR) and electrical resistivity tomography (ERT) methods only. Planning possible excavations is premature at this stage, but depending if substantial evidence is found, a small number of test or rescue excavation trenches may be necessary to validate the above results. 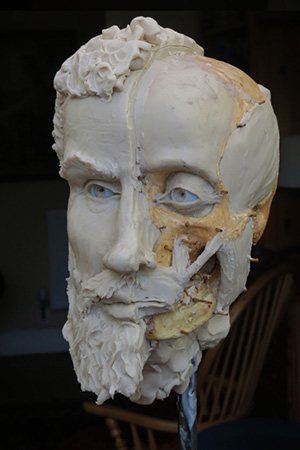 What methods would you use to prove that you had found Vesalius' skeleton?
We would have the skull dated, and the age at death of the person determined. The skull would be examined by a forensics team and tested for causes of death. We would then scan the skull, take a cast and make a facial reconstruction. I plan to do this with Richard Neave, who has proven, beyond doubt, that working from a skull enables a medical artist to recreate the features of the subject in the most accurate way possible.

The technique of facial reconstruction known as the Manchester method is a painstaking method of building up the soft tissue parts of the face muscle by muscle, thereby recreating the facial features of the skull bearer. Detailed reference to many cases, especially of archaeological interest, can be found in the book Making faces: Using forensic and archaeological evidence by Neave and John Prag.

Please tell us about your involvement with the events to mark Vesalius' 500th anniversary in 2014.
I am co-organizing and coordinating the conference Vesalius Continuum, in September 2014, which will include many Vesalius experts, including the translators and some advisory board members of The Fabric of the Human Body and surrounding events. The main aim is to celebrate and mark the quincentenary of the birth in Brussels in 1514 of Andreas Vesalius, a major figure of the Renaissance and one of the founders of modern scientific medicine. The meeting will be held on the Ionian island of Zakynthos, where he is known to have died while returning from a pilgrimage to Jerusalem 450 years ago in 1564. The year 2014 also marks the 150th anniversary of the unification of the Ionian islands with Greece in 1864 after a period under British 'protection'. The last comparable meeting was held on Zakynthos half a century ago on the 400th anniversary of Vesalius's death in 1964/1965.

Are there any other special Vesalius events or projects you are involved with?
I am involved in the organization of a series of surrounding events to the Vesalius conference.