The Fabrica as an Instruction Manual: How to Articulate the Bones

e humani corporis fabrica is known as a source of beautiful renderings and detailed descriptions of the human anatomy. But Vesalius’ instructions in the book, typical of his ambitious dedication to detail, also extended to the practical: How to disassemble and prepare each bone and ligament of the body. His were the most modern methods -- by 16th-century standards.

One of the lesser known points about the Fabrica is that the book was also used to disseminate important practical information. The section on how to articulate bones is very detailed and gives the impression that it was a procedure Vesalius had perfected over time by trial and error. The section on how to articulate the bones is placed at the end of the first book that dealt with the bones (Bk. I, Ch. 39). Vesalius claimed that his method was new - the traditional method was maceration in lime followed by cleansing in a fast-flowing river (fig. 1). Vesalius described this method as 'dirty and difficult', and that it did not show certain features of the bones such as processes, epiphyses, depressions, etc., because they would be covered by blackened ligaments.

Vesalius set out his own method, dubbed 'easy', in two steps - the first step shows how to obtain bones and cartilages from a cadaver by boiling, and the second explains how to articulate the bones. Instructions for the first step draw on analogies with cooking, while those for the second step resemble a complex DIY manual. His instructions run roughly like this: First, find a corpse (any corpse would do, though a cadaver emaciated from disease is the best), a tub (in which to discard the flesh, viscera and skin), and a large cauldron (in which to boil the bones) [fig. 2]. Also prepare a sheet of paper on a table on which to lay out the cartilages. Then, take a sharp knife and make an incision around the head, saw through the skull along the incision and dispose of the brain into the tub. This, Vesalius reminds the reader, will result in what was shown earlier in chapter 6 as figures 6 and 7 (fig. 3). Cut away the ears, eyelids and the tip of the nose for cartilages and place them on the paper. Vesalius goes through every part of the body from the head down, explaining where to make incisions and which cartilage to take out and set aside.

He also suggests that some structures should be boiled together – for example, the hand and the forearm should be boiled with the ligaments intact, so that the bones in the left and right arms or legs don't get separated and mixed up. The (fragile) hyoid bone is not to be boiled but removed at the same time as the larynx, tongue and throat, and then cleaned. Use a sponge to soak up the blood and squeeze it out into the tub. Remove the contents of the peritoneum in no particular order like 'a butcher' would. Once all the bones are placed in the cauldron, pour in enough water so that the bones are covered at all times, and keep the liquid clear by removing the scum and fat that rises to the surface as is normally done in cooking. The point of this boiling procedure is to enable the bones to be scraped clean with a knife, as with 'meat for eating'. The bones are to be picked out with a tong and cleaned carefully, so as to keep the smooth cartilage with which bones are encrusted, but the flesh, ligaments and tendons should be removed. The left and right arms, legs, toes and hands are to be kept separately by wrapping them in paper; care is also needed so that the ossicles are not removed by mistake. Some of the bones can be placed around the fire to dry further, but not the breast bone, which should be cleaned carefully with a sprinkling of hot water and stored with its membrane so that it prevents the breast bone from weakening or twisting. The ways in which Vesalius warns the reader to be careful in specific ways were underpinned by his knowledge of anatomy, and his practical advice, including the patience required of a procedure – 'this is a long job' –, indicate his extensive experience in articulating the bones.

Vesalius' second step is to explain the articulation of bones, but before that he weighs up the pros and cons of keeping the bones separately or articulating them. Keeping the bones separately in a box would enable the study of all aspects of individual bones at any time; articulated bones make certain parts of bones difficult to see and are thus less useful for study, though it makes for a better display. Articulation of bones should be done immediately after cleaning, before the bones harden. For this step, several awls, fine and coarse copper wires, and forceps to bend or cut the wires are needed (fig. 4). The awls are used to pierce bones and make holes to make dowel-type joints. Wires are used to join up bones - coarse ones for joining the larger bones and finer ones for the smaller bones. This procedure starts from the feet up. First, the feet are fastened onto a circular board with a hole in the center for an axle peg so that the whole box can revolve. Another hole is made near the circumference of the circle into which a rod can be inserted to take the weight of the structure. This rod can be in the form of a spear, javelin, trident, scythe, or as in Vesalius' case, a shovel (fig. 5). There will be another iron rod fixed on the circular board with spikes, which runs through the foramen of the sacrum and the other vertebrae, and is bent to match the curve of the spine. It should be longer than the skeleton so that it can be fixed to the top of the box (this allows rotation of the skeleton in the box). Vesalius gives detailed instructions about how to put the skeleton together, including some practical advice of laying out the left and right ribs in pairs before trying to assemble them, and joining the bones of the hand before attaching the forearm to the humerus. Though the actual assembly of the bones might seem the most difficult part, Vesalius insists that this step is 'easy' and that he had a fair measure of success on the first go by following the example of those who repaired broken plates and made stone cauldrons.

It is noteworthy that throughout the description of his method, Vesalius insists on the dissector using his own hands. The task of cleaning the bones should not be delegated to an assistant, not only because special care must be taken in order to preserve the cartilages, processes, heads and depressions while discarding the flesh, ligaments, tendons and periosteal membranes, but also because the process of cleaning each bone is an opportunity to study it in detail. He also emphasized that the success of articulation would depend on the manual dexterity of the dissector and the knowledge of how the bones fit together, as explained earlier in the book. The ability to articulate a skeleton, then, was a manual demonstration of the dissector's mastery of anatomical knowledge.

One of the skeletons articulated by Vesalius has survived time – it is now kept at the Anatomical Museum of the University of Basel, and is the oldest existing example of an articulated skeleton in Europe. These are the remains of one Jacob Karrer von Geweiler at Basel, who committed bigamy, and, when found out by his wife, attacked her with a knife and left her for dead. He was apprehended and beheaded on May 12, 1543. Vesalius was in Basel at the time, supervising the printing of the Fabrica.

Karrer's skeleton was later joined by a skeleton of a woman, articulated by Felix Platter, Professor of Medicine at Basel, following Vesalius's method of wiring. They were displayed in a hall at the University of Basel where medical degrees were conferred. A drawing of articulated bones (ca. 1560) which is now at the Wellcome Library also suggests the procedure of articulation with wires (fig. 6). In the 17th century, articulated skeletons became ubiquitous in Europe, thanks to Vesalius' explanations in the Fabrica.

Kornell, Monique. 2000. "Vesalius' Method of Articulating the Skeleton and a Drawing in the Collection of the Wellcome Library." Medical History 44:97–110.

Kusukawa, S. 2010. "Vesalius, the Book and the Bones." In The Alchemy of Medicine and Print: The Edward Worth Library, Dublin, ed. by Danielle Westerhoff. Dublin: Four Courts Press. 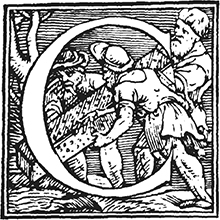 Fig. 1. In the decorative initial C, the box containing the cadaver about to be placed in a stream can be seen. Note the holes covering the box. Vesalius explained that small holes were bored all over the box in order to wash away the lime and flesh, but not the bones. 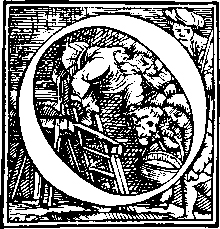 Fig. 2. Vesalius describes the large cauldron in which to boil the bones as the kind used to boil lye. A cauldron is shown within the decorative letter O, where a putto is about to place a skull into a cauldron placed on a fire.

Fig. 3. Vesalius explained how to cut through the skull horizontally, and referred to these earlier figures to show what the two pieces should look like after removal of the brain.

Fig. 4. In the far right corner of this table, two forceps (X and Y) can be seen: one to bend the wire, and the other to cut the wire for articulating the bones. Various knives are also shown in the far left corner of the table.

Fig. 5. Frontal view of a full skeleton, with its arm resting on a shovel. Vesalius suggested that an articulated skeleton should rest on some rod in the shape of a javelin, spear or trident in order to take some of the weight. The rather straight spine might also indicate the difficulty of supporting the skeleton with an iron rod (not depicted here) that mimicked the curvature of the spine. Vesalius emphasized the importance when articulating the bones of ensuring that the skeleton exhibited a decent upright posture.

Fig. 6. A drawing (dated to about 1560) from the Wellcome Library, London (cat. No. 39346). Monique Kornell has argued that this drawing shows the influence of Vesalius’ method of articulating the bones.