The Fabrica: Heart, Brains and Beauty

e humani corporis fabrica is lush with striking images. Vesalius strove to depict each anatomical part with perfect accuracy. He took pains to do so, even describing elaborately how he might string up a skeleton in order to depict its appearance in a standing position. The over 200 large plates and smaller illustrations are not simply scientific: they present a deliberate, singular beauty and are treasures of Renaissance art in their own right. 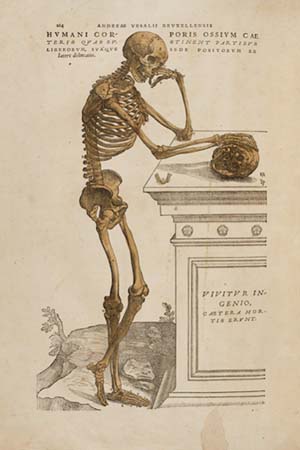 Anatomy and art: The Fabrica

The most unforgettable images include those known as the Muscle Men at the beginning of Book II, depicting men in progressive states of dissection amid the natural landscape of what is presumed to be the Eugenean hills near Venice and Padua, Italy. If joined together, the pictures form a continuous panorama, placing humans firmly in the natural world despite the seemingly detached scientific investigation of their bodies. Exquisite ornamental initial letters also decorate the book.

Possibly the most iconic image from the Fabrica is a skeleton leaning on a plinth and contemplating a skull beneath its right hand. It is a metaphor for contemplating death, which ironically is what gives life to the Fabrica itself, as Vesalius derives his knowledge from the corpses of the humans he dissects.

One of the great, persistent mysteries of the Fabrica is the question of who actually cut the illustrations into the woodblocks for printing.

Many Vesalius watchers over the centuries concluded that the artists belonged to the studio of Titian, an influential Italian Renaissance artist. However, scholars since have dismissed this theory.

Flemish artist and Titian pupil Jan Stephan van Calcar, however, may have illustrated some of the figures and possibly some of the tables.

Dr. Sachiko Kusukawa on the Art of the Fabrica